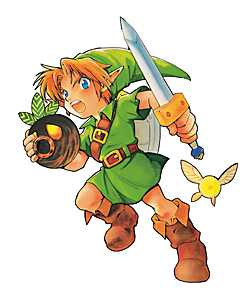 Zelda RPG, previously known as Triforce MUCK, is a text-based online roleplaying game based on the Legend of Zelda series that allows for both real-time and asynchronous roleplay.

Connecting is quick and easy. Even though there are no levels or dice, the possibilities are only limited by your imagination. We are a growing group of creative and motivated players who love the games and want to have fun being a part of the Zelda series. Do you want to join us? Learn how to create your character here!

How does it work? Is this a forum?

It’s neither a forum nor a MU* (if you know what that is 🙂 ), it’s something in between. We use Slack, a chatting tool that allows you to pose in real time or to leave your pose there so that another player will reply later. That might sound like a forum, but you can also run some commands (like a MU*) that will allow you to see a character’s or room’s description and picture, pose anonymously (or, in some cases, as a different character), check a character’s inventory, etc.

Here are a couple of screenshots of a battle scene and a conversation. 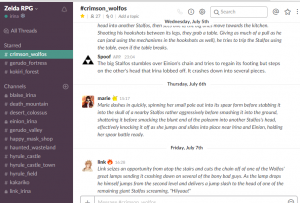 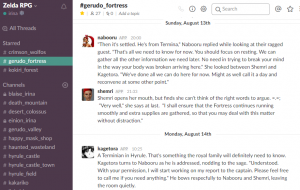 When and where in the Zelda timeline is it set?

It is set in both Hyrule (from Ocarina of Time) and Termina, but incorporates elements from all games, including Breath of the Wild. As far as when, it is set after the end of Ocarina of Time, but we created a different timeline where Link does not back in time and just continues living in Hyrule.

What type of characters can I play?

You can choose to play any of the Hyrulean races including Kokiri, Gerudo, Rito, Twili, Hylians, Gorons, Zoras, etc. If you prefer the dark side, you can battle as a Lizalfos, Wizzrobe, Miniblin, or any other race of your choice. Or, if you prefer, play an evil Hylian who wants to become Ganondorf’s right hand! We are recasting the players for many main characters from the games, so you can try playing one of them, or just create your own character and go find adventures with Link, join Ganondorf’s dark forces, attend a party at Zelda’s castle, or milk a cow with Malon!

Can I play Link, Zelda, or any of the “official” characters from the games?

Absolutely! You can choose any characters from any Zelda games, as long as they are available. Those are what we call FCs, or feature characters.

Our setting is Hyrule and Termina based on the Ocarina of Time/Majora’s Mask timeline, so if the character you want does not really match these settings, talk to any of us and we will figure out together how to make it work.

Check the list of characters here to see who is available. If you are interested in any particular character, let us know, even if it is taken — just in case we need a new player for him/her at some point.

If you decide to play one of those characters, you will just have to create an account for an original character (meaning a personal character that you make up, not the FC), and send a direct message to Link, Xu, or Irina. We will do a small roleplay test (painless, we promise) and we will quickly set you up so that you can play the FC from your account.

How often do I have to connect or pose?

There are no time/pose requirements for any characters. However, for characters appearing in the games, we do ask you to participate in big plots where your character would obviously be affected (there is a commitment there, but those scenes are lots of fun…)

Ready to play? Just click here and get a character. We look forward to roleplaying with you!

© 2016 All Rights Reserved | Powered by Themely